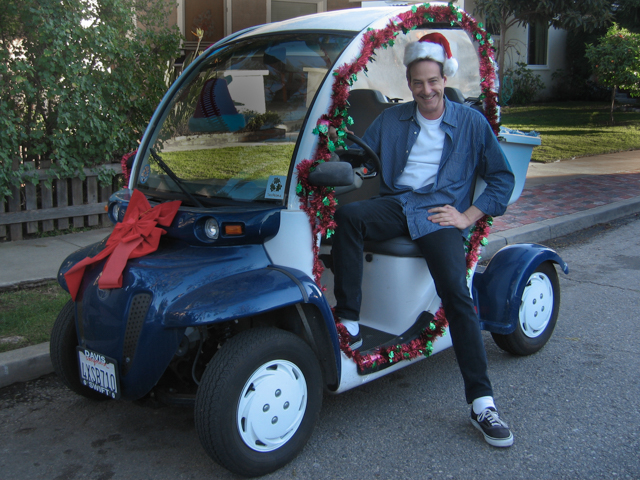 My first electric car looked like a cross between a golf cart and a Flintstone mobile. GEM (Global Electric Motorcar) is a low-speed vehicle, legal on city streets only and a top speed of 25 mph. It was years before the Prius or Tesla; no auto manufacturer was building electric or hybrid vehicles. I found a used blue and white GEM car in Hollywood, a sporty two-seater.

It was supposed to have a range of 25 miles, so I figured I’d make the 17-mile drive back to Venice. Off I went, bouncing along in LA traffic, cars honking and passing, but most were patient. People stared, and I waved and thought, maybe this is making them think of new possibilities. I cruised under the 405 overpass. A man and woman, sipping out of a paper bag, watched me drive by, and I could detect a glimmer of approval in their eyes. Yes, I’m sure that was approval. The car started acting funny three blocks from home. At 0% charge, I rolled right up in front of our house, just like that.

I ran an orange extension cord out of a window, across the sidewalk, and plugged that little cutie in. Driving that car was like being a rock star. Everyone wanted to talk about it, and I got everyone to drive it. I loved watching their faces when they stepped on a floor peddle with no engine running, and that cart zoomed off.