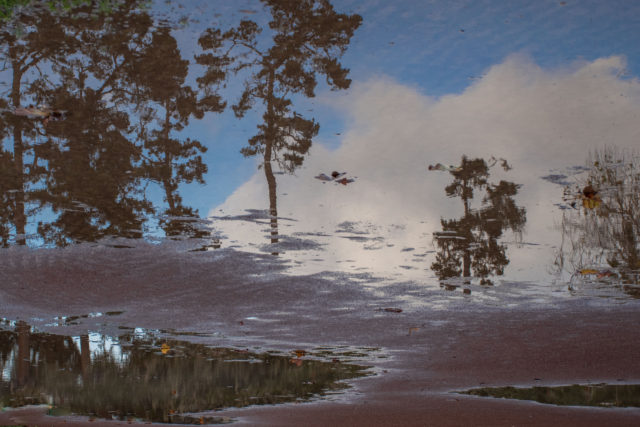 I love to photograph rain puddles, focusing deep into the water to reveal the trees, clouds, and sky from a new perspective. It’s easy to miss the reflection. You have to take a moment, staring down into the puddle and shifting your gaze, for the image to reveal itself.

I first met Enrique when he came to clean our yard, working hard in his easy, simple way. I was feeling guilty for not doing the work myself; I tried to help, but I was only getting in his way, so I left him to it. The next time he came, holding the newest growth of a plant between his fingers and thumb, he said, “put a little dishwashing soap in a gallon of water and give it to the plant every three days.” His intimate knowledge of the plants, simple solutions, and reluctance to use poisons, revealed his intelligence and sensitivity. Then, he told me about his wife and children and also his mother who lives in Mexico in a house with no windows, and how he tried to buy her windows, but she said, she doesn’t need them. A deeper revealed Enrique as a husband, father, son, horticulturist, and philosopher.